Hundreds of migrants rescued by MSF charity land in Sicily 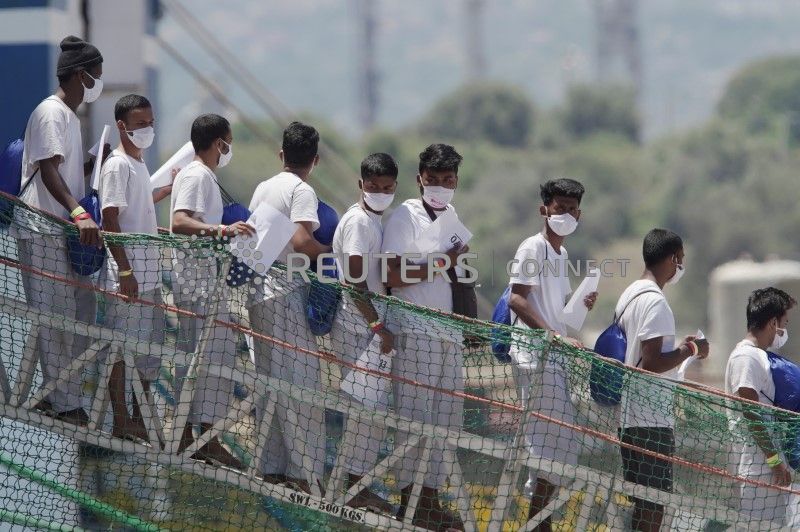 Migrants disembark the ship 'Geo Barents' run by Doctors Without Borders (MSF), which was given permission to dock at the Sicilian port of Augusta after a week of waiting at sea, to board the quarantine ship 'Aurelia', in Augusta, Italy, June 18, 2021. REUTERS/Antonio Parrinello

AUGUSTA, Italy (Reuters) – Around 400 migrants disembarked on Friday from the ship Geo Barents at the Italian port of Augusta, in Sicily, more than a week after the first rescue operation was carried out in the Mediterranean Sea.

Of the people on board, mainly from Africa, some 100 were minors, the MSF charity operating the boat said. Around 40 migrants were affected by fuel burns, dehydration, hypothermia and infected scabies.

The Geo Barents took the first migrants on board on June 10 off the Libyan coast. Most of them will now face 14 days of coronavirus quarantine on another boat.

For years Italy was the primary route into Europe for hundreds of thousands of asylum seekers and other irregular migrants but the numbers making the perilous journey across the Mediterranean have fallen in recent years.

However, there has been a pick-up in arrivals in 2021, with 18,170 people reaching Italy so far against 5,696 in the same period last year, interior ministry data show.

More than 1,000 landings in the last few days have overwhelmed the reception centre on the southern Italian island of Lampedusa, one of the main landing points for people trying to get into Europe.

Authorities are now moving migrants away from the island to ease pressure on the centre.