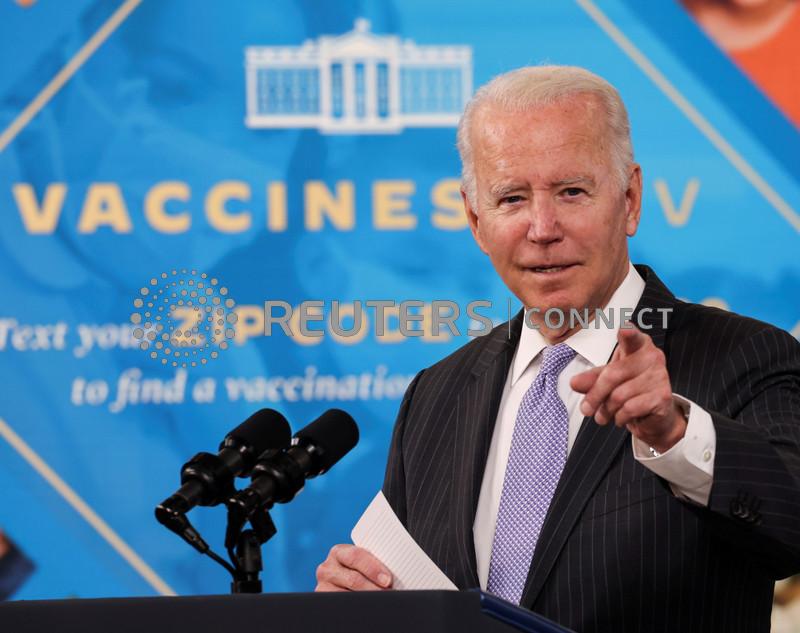 WASHINGTON, Jan 18 (Reuters) – The White House is seeking to “reset” talks on its $1.75 trillion spending bill, aiming to salvage climate change measures but pare down or cut items like the child tax credit and paid family leave to appeal to U.S. Senator Joe Manchin and other Democrats as soon as this week, said two people working on the plan.

Democratic President Joe Biden’s administration is expected to pivot from a long-shot attempt to pass voting rights legislation through the Senate, which begins on Tuesday, to renew talks in earnest with lawmakers on a slimmed-down version of the Build Back Better bill, the sources said.

White House climate czar Gina McCarthy and U.S. Treasury officials will head to Capitol Hill to meet with lawmakers and staff on the bill, the sources said, as part of the effort to preserve some of Biden’s economic and environmental agenda.

The president continues to work with both chambers of Congress to pass sweeping legislation that helps the middle class pay for items like prescription drugs and child care, said Andrew Bates, a White House spokesman.

“We are always in touch with members about this,” Bates said.

Manchin, a moderate Democrat, abruptly halted talks on the spending package before Christmas, citing his concerns over inflation, deficit spending and what he called an attempt to “reshape our society.”

Biden, Manchin and Senator Kyrsten Sinema of Arizona, another Democrat who has expressed reservations about the spending bill, met Thursday at the White House to talk about voting rights. The president had not spoken to Manchin since the West Virginia senator’s surprise announcement last month. “There needs to be a reset” to negotiations, said one person working on the plan. “There’s not a lot of mystery anymore about what Manchin would accept. We need to calibrate as much as possible to what he can accept, and then there needs to be a personal ask (by Biden) for his vote.”

With all 50 Republicans in the 100-seat Senate opposed to the spending bill, the White House has to win over Manchin and any other Democratic holdouts. If it succeeds, Democratic Vice President Kamala Harris could cast a tie-breaking vote.

The revamped measure would likely run over $1 trillion, these people said, and could jettison hundreds of billions of dollars of funding for new social safety net programs like paid family leave, universal pre-kindergarten and home healthcare.

It is unclear which programs would be slimmed down or scrapped entirely. The White House and Democrats are weighing imposing stricter income caps on the child tax credit and other social safety net measures.

Capping who gets child tax credits could target the money to lower-income earners but stretch funding out for a decade, in line with Manchin’s demands. The monthly payments, which began last July, lifted some 3.6 million children out of poverty in October, according to Columbia University research.

Manchin indicated earlier this month that he supported $555 billion in climate spending, including production tax credits for solar and wind industries, which are seen as vital to ensure the United States reaches its 2030 emissions reduction goals, the sources said.

Manchin’s approval of this funding is seen as the “fulcrum” to move the bill forward, on top of which progressive-friendly social spending, including expansion of the 2010 Affordable Care Act, commonly known as Obamacare, can be added.