From the Editor-in-Chief’s desk: Your October 28 briefing Had a bit of a laugh over the Ginger Meggs comic on Page 28 this morning. The lesson was on impulsive buying… and cartoonist Jason Chatfield certainly knows how to get that kicker in there!

Anyway, let’s take a look at some of the headlines in The Fiji Times for Thursday, October 28.

But before that, remember we are celebrating our 152nd anniversary and you can go into the draw to win cash. Ten people won cash last month. This month of October, 20 lucky readers get a chance to win cash prizes. All you have to do is cut out the masthead of The Fiji Times newspaper, write your name, address, and a phone contact on it, and place this in a bin at a participating store near you. Turn to Page 11 for details.

YEAR 12 and Year 13 students who begin classes next week Monday do not have to be vaccinated to enter their school premises, says Education Ministry’s head of national education service delivery Timoci Bure. He reiterated what Education Minister Premila Kumar had said earlier this month that there was no “no jab, no school policy”. However, the country’s two teacher unions — Fiji Teachers Union and Fijian Teachers Association — said further clarification was needed because the Safe School Reopening Guidelines issued earlier this month stated anyone above the age of 15 years had to be fully vaccinated before entering a school premises.

# MORE than 900 teachers will undergo training to provide psychosocial support services and manage student behaviour when they return to school. This, according to Education Ministry permanent secretary Dr Anjeela Jokhan.

# FORMER Housing Authority of Fiji and Public Rental Board chairwoman Lorraine Seeto has been replaced by Fiji National Provident Fund CEO Viliame Vodonaivalu. The Housing Ministry issued a statement yesterday unveiling a new board designed “to enable the expansion of affordable housing stock for purchase and rent for Fijians at all levels of income”.

# THE High Court in Lautoka jailed a man for 14 years and seven months for raping a 14-year-old girl in July, 2019. Justice Thushara Rajasinghe said in his October 13 ruling that the man, who was the victim’s step-uncle, had breached the trust of the girl.

# A MAN who allegedly stabbed his 21-year-old de facto partner to death has been further remanded in custody. Sivaniolo Vunakece is charged with one count of murder. He appeared before magistrate Waleen George at the Suva Magistrates Court.

LETTERS TO THE EDITOR/ LEADER

We have interesting letters on these pages. The leader is on fire safety and the impact of house-fires on those directly affected. 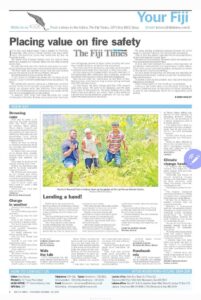 This section is quite popular. Read about:

LAUTOKA human rights lawyer Sabrina Khan-Sharma has been nominated by the United Kingdom’s Lead5050 judging panel for two awards — 2021 Mentor of the Year and 2021 Champion of the Year. 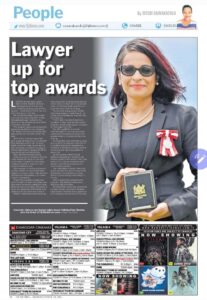 SAUMA Masidilo developed a passion for singing at a very tender age while growing up in his village of Vatulele, Wailei, in the province of Cakaudrove in the 90s. And his interest in music was inspired and nurtured by his grandfather. His grandfather was part of the village’s very popular sigidrigi group that used to perform classic iTaukei songs during Christmas and New Year gatherings or any special occasion within the province. 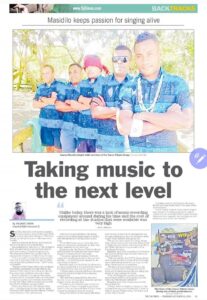 The big one on the back page is about rugby union and the search for players to don the number 10 jersey. 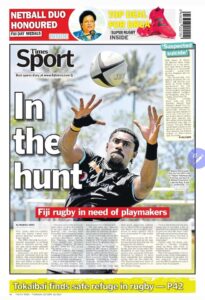