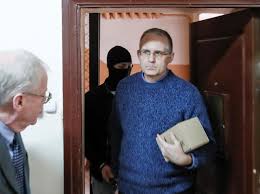 Former U.S. Marine Paul Whelan, who was detained on suspicion of spying, is escorted inside a court building before a hearing regarding the extension of his detention, in Moscow, Russia, May 24, 2019. REUTERS/Shamil Zhumatov

MOSCOW (Reuters) – A former U.S. Marine held in Moscow on suspicion of spying said on Friday he had been threatened by a Russian investigator and harassed in custody, accusations that added to strains in U.S.-Russian relations.

Paul Whelan, who holds U.S., British, Canadian and Irish passports, was detained in a Moscow hotel room on Dec. 28 and accused of espionage, a charge he denies. If found guilty, he faces up to 20 years in jail.

Whelan, whose detention was extended until the end of August at a hearing on Friday in Moscow, told reporters he believed the case against him was politically motivated revenge for U.S. sanctions imposed on Russia.

“I have been threatened. My personal safety has been threatened,” he said from inside a cage in the courtroom. “There are abuses and harassment that I am constantly subjected to.”

Whelan said he not been allowed to shower in two weeks nor granted medical and dental treatment. He said he had not received books or correspondence in two months.

“This is typical prisoner-of-war chapter one isolation technique,” he said. “They are trying to run me down so that I talk to them.”

Outside the courtroom, U.S. diplomat Michael Yoder told reporters that Whelan’s comments were “of grave concern to us.”

“I guarantee you we will protest this fact with the Russian government and we will request the opportunity to speak frankly with him about these threats,” he said.

Russia’s Federal Security Service (FSB) detained Whelan after an acquaintance handed him a flash drive containing classified information. Whelan’s lawyer says his client thinks he was set up by the acquaintance and the FSB.

Whelan’s brother, David Whelan, said his sibling had been falsely accused, wrongfully detained, and will “continue to be mistreated unless one of the governments of the nations of which he is a citizen intervene on his behalf.”

“Paul’s defense team has been clear in their communications to us that Paul is being held, and coerced, in order to gain a confession,” David Whelan told Reuters in an email.

During Friday’s hearing, Whelan asked the court to have FSB investigator Alexei Khizhnyak taken off the case and accused him of “insulting my dignity and threatening my life,” the Interfax news agency reported.

The judge told Whelan he only had the right under Russian law to request the replacement of court or prosecuting officials, but not an investigator.

“I understand that but what am I supposed to do if my rights are being violated?” Whelan was quoted as saying.

A State Department spokeswoman said it had no higher priority than the welfare and safety of U.S. citizens abroad.