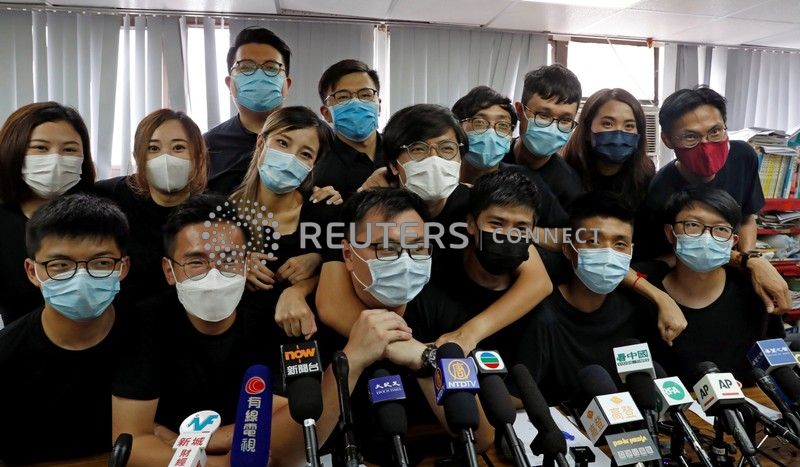 HONG KONG (Reuters) – Several dozen Hong Kong democrats are due to report to local police stations across the city on Sunday, with some expecting to be charged with breaches of national security as a crackdown on the democratic opposition intensifies.

Benny Tai, one of the organisers of an unofficial primary election last summer, said in an online post that there was a chance he would be “formally charged”.

Tai was arrested in a dawn raid along with more than 50 other democrats on Jan. 6 in the largest national security operation since the law’s passage last June.

They were accused of organising and participating in an unofficial “primary election” last July aimed at selecting the strongest candidates for a legislative council election.

The democrats were detained at the time, questioned, and some had their mobile phones and computers confiscated, but released pending further investigations.

“My chance of bail won’t be too great,” wrote Tai, who has been accused by Chinese authorities of being a key tactician for the pro-democracy movement in the former British colony.

Those also called in by Hong Kong police include John Clancey, a U.S. citizen and human rights lawyer, as well as a group of younger “resistance camp” democratic activists including Lester Shum, Sam Cheung, Ventus Lau and Fergus Leung.

The democrats denounced the arrests as political persecution for the informal, peaceful poll that drew 600,000 votes in a city of 7.5 million.

A rights advocacy group, “Power for Democracy”, that co-organised the primary elections, said in a Facebook post on Friday that it had disbanded.

When contacted by Reuters, a local police spokeswoman would not immediately say whether the democracy advocates would be charged with breaching the national security law.

The Hong Kong police say 99 individuals have been arrested for suspected violations of the security laws so far.

Some of these have been denied bail, including media mogul and prominent China critic Jimmy Lai, despite protracted legal appeals.

The sweeping national security laws — seen by critics as a threat to Hong Kong’s freedoms and autonomy — punish acts of subversion, secession, collusion with foreign forces and terrorism with possible life imprisonment.