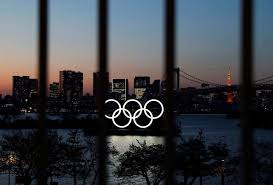 FILE PHOTO: The Olympic rings are pictured at dusk through a steel fence, at the waterfront area of the Odaiba Marine Park, after the postponing of the Olympic Games Tokyo 2020, due to the outbreak of coronavirus disease (COVID 19), in Tokyo, Japan March 25, 2020. REUTERS/Issei Kato

TOKYO (Reuters) – The International Olympic Committee (IOC) and Japanese organisers are in final stages of talks to set the opening date for the Tokyo Games in July next year, Japanese media said.

The Tokyo event, postponed last week due to the coronavirus pandemic, will most likely have its opening ceremony in 2021 on July 23 and closing ceremony on Aug. 8, each a day earlier on the calendar than the original 2020 plan, said public broadcaster NHK on Sunday, citing unnamed sources.

Prime Minister Shinzo Abe announced a delay of about one year on Tuesday after a call with IOC President Thomas Bach. It is the first postponement in the 124-year history of the modern Olympics, although several – including the 1940 Tokyo Games – were cancelled due to war.

The delay is a huge blow to Japan, which has invested $12 billion in the run-up, although financial markets initially cheered by the decision, as some investors had anticipated cancellation.

Economy Minister Yasutoshi Nishimura said on Sunday the government, now compiling economic-stimulus measures that Abe said will be the biggest ever, will take into account that the Olympic delay will push back several trillions of yen (tens of billions of dollars) of demand to next year.

“If demand is being pushed back until next year, that means the same amount of demand will evaporate this year. We’ll take this into account” in compiling the stimulus package, Nishimura told a television programme.

Greece to open to tourists from 29 countries from June 15

Female membership of IOC Commissions rises to 47.7 per cent