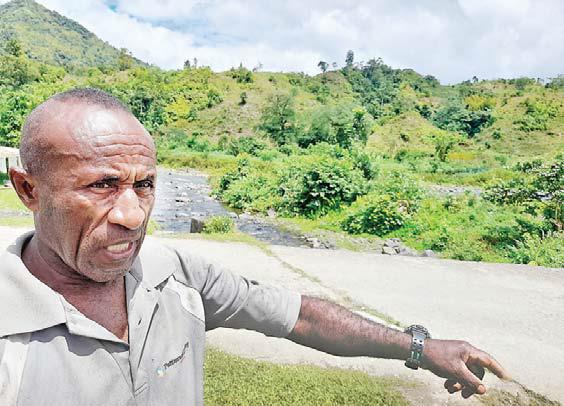 Wainimakutu farmer Ratu Inoke Sauniyaka shared about the struggles and challenges farmers faced in trying to get their produce to the village and then to the market. Picture: ATU RASEA

And villagers claim they have been asking Government since January last year to fix roads leading to the villages because it was affecting access to markets for their only source of income — farming, and access to cheaper travel — bus services.

Naraiyawa villager Mitieli Kuruilawaki claimed the roads that connected the three villages had deteriorated significantly and posed a risk to all road users.

He said Government had an obligation to ensure roads were in a condition that did not endanger drivers and passengers.

Mr Kuruilawaki said it was impossible for bus drivers to drive right up to the villages because parts of the road had washed away after continuous heavy rainfall last year.

He said it was also risky for carriers travelling to Naraiyawa because the road surface was badly eroded.

Ratu Inoke said farming was the only source of income for families in the three villages and the road was an integral part of their life.

He said the villagers used the roads every day to transport agricultural produce to town.

Ratu Inoke claimed infrastructure development in the interior villages of Fiji had been neglected.

He said it was an issue that Government needed to address because people’s livelihoods and safety were dependent on it.

Questions sent to Infrastructure Minister Jone Usamate on the issue remained unanswered when this edition went to press last night.