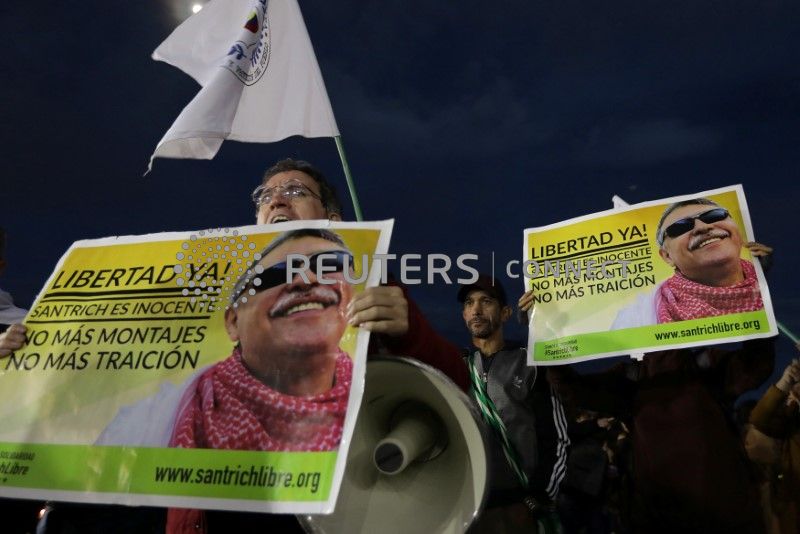 Supporters of the Revolutionary Alternative Force of the Common (FARC) hold signs during a protest demanding the release of former FARC leader Seuxis Hernandez, known for his war alias Jesus Santrich, in Bogota, Colombia May 15, 2019. The sign reads: "Freedom now! Santrich is innocent, no more betrayal". REUTERS/Luisa Gonzalez

BOGOTA (Reuters) – A former commander of the Marxist FARC rebel group was released from prison in Bogota on Friday and immediately re-arrested after new evidence came to light on drug trafficking charges, the attorney general’s office said in a statement.

In a move likely to rattle an already delicate peace accord with the now-demobilized insurgents, Seuxis Paucias Hernandez, known by his war alias as Jesus Santrich, was escorted out of prison in a wheelchair and moments later, as he left prison gates, was taken back inside by police.

Hernandez, 52, was indicted more than a year ago by a U.S. grand jury for conspiracy to export 10 tonnes of cocaine, worth $320 million in street value. He was ordered released on Wednesday by a special tribunal.

“As a result of international judicial cooperation, in the last few hours new evidence and elements have been incorporated that clearly account for the circumstances of time, manner and place of alleged conspiracy to conduct drug trafficking,” the attorney general said in a statement.

The Special Jurisdiction for Peace (JEP), which prosecutes leaders of the Revolutionary Armed Forces of Colombia (FARC) guerrillas, who handed in their weapons under a 2016 peace deal, had said evidence provided by prosecutors did not allow it to evaluate whether, or when, he allegedly conspired to move cocaine to the United States.

The JEP’s ruling caused an institutional crisis when the attorney general immediately resigned in protest.

Because the JEP has jurisdiction over all crimes during the war, Hernandez’s extradition can only go ahead if the alleged crime took place after the accord.

The Revolutionary Alternative Common Force (FARC), the political party that emerged after the peace accord, protested the recapture of Hernandez and said it was a “a setup.”

President Ivan Duque has called a meeting on Monday with leaders of political parties to discuss the situation.

Duque promised during his 2018 campaign to make changes to the peace accords, that he has said are far too lenient on former FARC commanders.

Colombia is very much divided between those who support the peace agreement that ended five decades of war that killed 260,000 people, and those who want to see the FARC leaders jailed or the war ended on the battlefield.