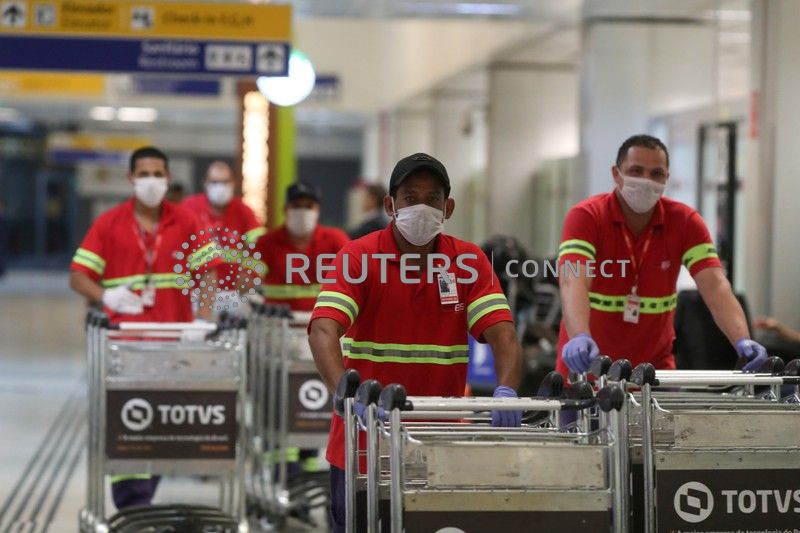 BRASILIA/SAO PAULO (Reuters) – Brazil confirmed the first case of a fast-spreading new coronavirus in Latin America on Wednesday, diagnosing a 61-year-old man in Sao Paulo who returned recently from Italy.

The official diagnosis comes during Brazil’s carnival holiday, a peak time for domestic travel when millions of revellers throng to major cities for raucous street celebrations.

Brazilian stocks tumbled more than 7% on Wednesday in their first trading since Friday, following a holiday closure when global bourses dropped sharply on concerns about the epidemic.

“We still don’t have all the answers for how coronavirus will behave in the Southern Hemisphere,” Health Minister Luiz Henrique Mandetta said, noting that Brazil’s tropical climate and late summer weather could slow the spread of the disease.

Mandetta said there are 20 suspected cases of the new coronavirus in the country, and 12 of them had visited Italy. He expects that number to jump as more Brazilian tourists return from their travels.

The minister added that there was some concern about the steady supply of medical equipment such as masks made in China, where the outbreak began.

Brazil’s first confirmed patient, a Sao Paulo resident, had travelled to Lombardy, in northern Italy, from Feb. 9 to Feb. 21 and had symptoms compatible with the disease, the ministry said.

Italy has been hardest hit by the outbreak in Europe, with more than 350 cases reported and 11 deaths.

The Brazilian patient remains in good health and will be monitored in isolation for the next 14 days, the Albert Einstein Hospital in Sao Paulo said in a written statement.

Officials are reaching out to early 60 people who had contact with the patient, including his wife and some passengers sitting near him on a flight. On Sunday, a day before he went to the hospital, the patient received nearly 30 people at his home.

In the state of Pernambuco, a 51-year-old woman arrived this week from Italy with mild flu symptoms, according to the state health secretariat.

The hardest-hit stocks on the Sao Paulo stock exchange included state-controlled oil company Petroleo Brasileiro SA, which fell nearly 10%, and iron ore miner Vale, which relies on Chinese demand for much of its revenue and was down more than 9%.

The new coronavirus is believed to have originated in the Chinese city of Wuhan late last year and has infected about 80,000 people and killed more than 2,700, the vast majority in China.