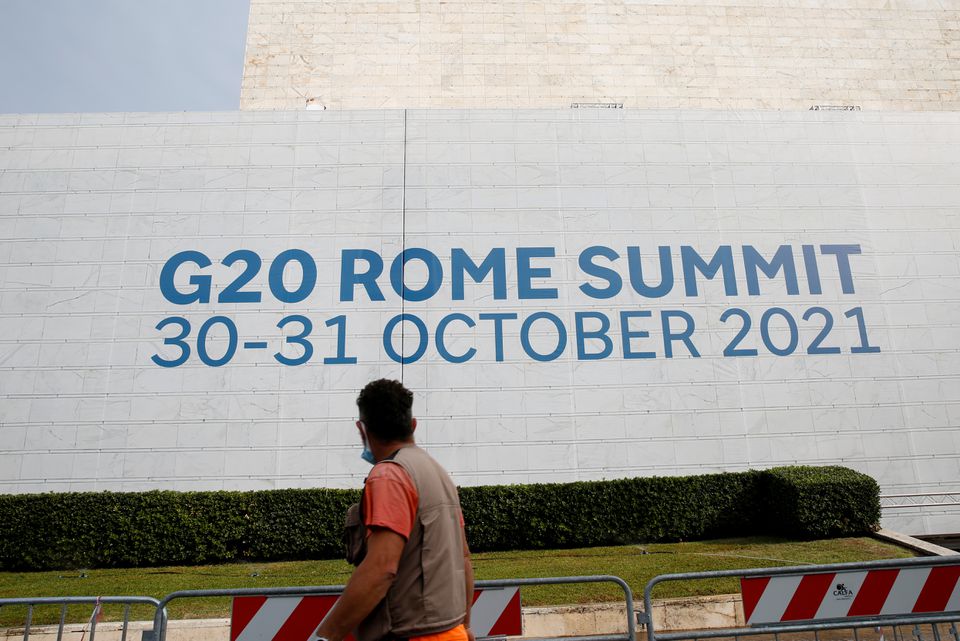 A worker looks at the G20 Media center at the Palazzo dei Congressi, in the city's EUR district, that will host the G20 summit with heads of state from major nations for a two-day meeting from October 30-31, in Rome, Italy, October 22, 2021. REUTERS/Remo Casilli/File Photo

Biden will also seek to cement progress on a global minimum tax during his trip, Sullivan told reporters.

Biden leaves for Italy on Thursday. He is slated to meet with Pope Francis at the Vatican on Friday before kicking off meetings with leaders of the world’s largest economies in Rome. After the G20 meetings, Biden travels to Glasgow, Scotland, to attend the U.N. climate change conference COP26.

Sullivan said the United States and Europe were united ahead of the two summits and noted that China’s President Xi Jinping and Russian President Vladimir Putin were not attending in person. Xi has not traveled outside of China since the COVID-19 pandemic started.

“The U.S. and Europe will be there, and they’ll be there energized and united at both the G20 and COP26, driving the agenda,” Sullivan said.

Biden’s second trip abroad since becoming president also comes amid continued frustration over the U.S. withdrawal from Afghanistan and a cloud over Biden’s own domestic agenda as infrastructure and social spending bills struggle Congress.

Biden, a devout Catholic, will meet with Pope Francis amid criticism from U.S. bishops over Biden’s stance on abortion rights. read more

Sullivan said the two men would discuss climate, migration and income inequality during their meeting.

The president will then hold talks with Italian leaders and a sit-down with French President Emmanuel Macron in an effort to repair relations after a rift over a U.S. security pact with Britain and Australia.

On Saturday and Sunday, Biden will attend G20 meetings, which will touch on Haiti but focus on core economic themes, such as global minimum tax.

“He’ll be laser focused on supply chains and energy prices because he knows that these issues impact working families here in America,” Sullivan said.

The White House did not confirm other one-on-one meetings between Biden and fellow leaders but indicated more were being planned.

Biden will conclude his foreign trip with a stop in Glasgow to press the world to do more in its fight against global warming.

Biden is expected to emphasize the U.S. goal of cutting its greenhouse gas emissions 50-52% by 2030 compared with 2005 levels, but continued haggling over the climate pieces in his Build Back Better bill may undermine his pitch as world leaders question how Washington will make good on its promises.

Sullivan said U.S. allies were sophisticated enough to know the democratic process of getting difficult bills through Congress.

“Whether there is a deal this week or whether the negotiations continue, there will be a lot of energy and enthusiasm for the effort the president is undertaking right now,” Sullivan said.