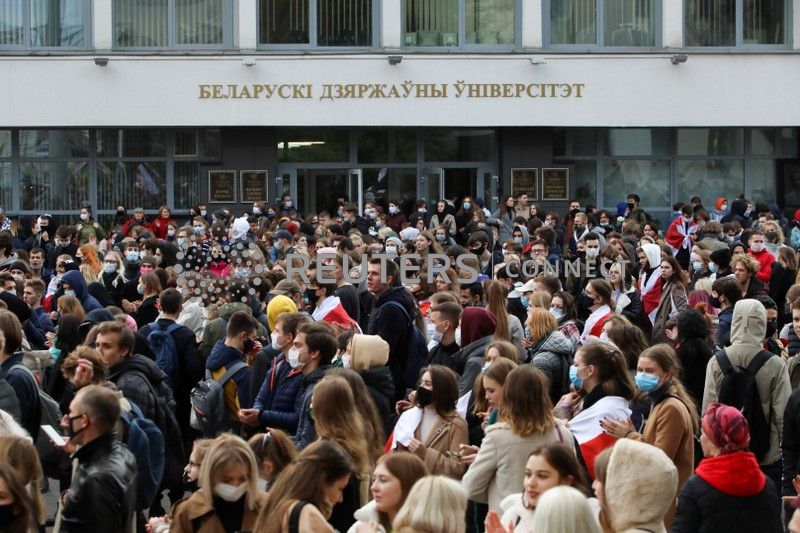 MOSCOW (Reuters) – Dozens of Belarusian students said on Wednesday they had been expelled from university after joining a nationwide strike aimed at forcing veteran leader Alexander Lukashenko to step down.

Students, factory workers and pensioners have taken to the streets since Monday, part of a protest action called for by exiled opposition figure Sviatlana Tsikhanouskaya who hopes economic disruption will compel Lukashenko to step down.

She has accused him of rigging an August presidential election which she says she won and demanded he step aside and allow new elections to be held.

Lukashenko has insisted his election victory was legitimate and used force to crack down on protesters.

Many student protesters discovered on Wednesday that they had been expelled for defying him.

At least 15 students from a medical university in Minsk were expelled after taking part in the strike, one student told Reuters on condition of anonymity, fearing reprisals.

Another 18 students from the Belarusian State University of Culture and Arts found their entry passes had been blocked, after which they were informed that they had been kicked out, a student group wrote on its Telegram channel.

The expulsions came a day after Lukashenko, who has been in power since 1994, said students who broke the law would be punished.

“Those who violated the law at unsanctioned protests lose the right to be students,” he said. “Please send them to the army or (throw them) on to the streets.”

In one case, police detained a 21-year-old student for allegedly barging into a classroom at a university in Minsk and calling on fellow students to join the strike, the Interior Ministry and Prosecutor General’s Office said.

He could face up to three years in prison.

In the city of Vitebsk, northeast of the capital Minsk, students made a video appeal to the authorities, calling for Lukashenko to step down and for violence against demonstrators to stop.

“Many students from Belarus are now facing pressure from the administration of educational institutions for peacefully expressing their opinion,” Maria, a third-year veterinary student, said in the video published on Wednesday.

“This is done in different ways. With the riot police, detentions, threats of been barred from taking exams and tests.”

At one Minsk university specialising in linguistics, at least 30 professors joined their students in the strike, one of the professors told Reuters.