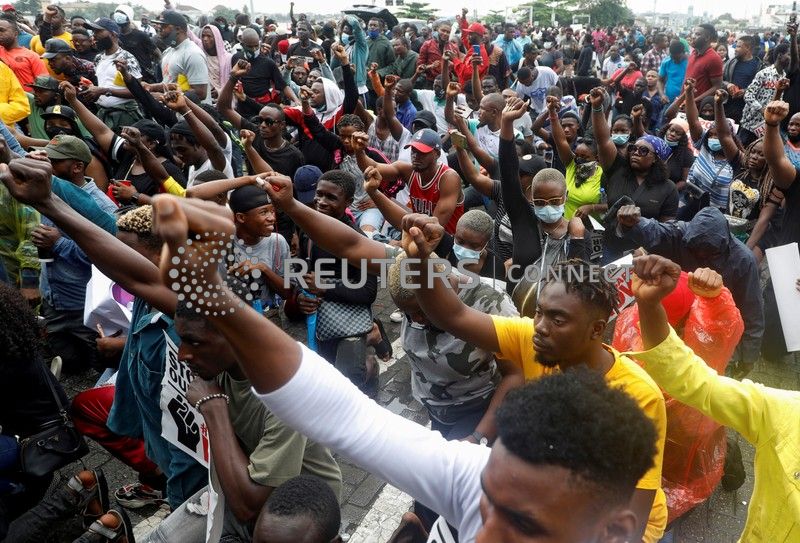 ABUJA (Reuters) – Nigeria’s Lagos state government asked the army to intervene to restore order amid anti-police brutality protests, but soldiers did not shoot civilians, the military said, an assertion an Amnesty International investigation disputed on Wednesday.

Nigeria has been on edge following one of its biggest social upheavals in 20 years. Demonstrations across the country turned violent on Oct. 20 when witnesses in Lagos said the military opened fire on peaceful protesters shortly after local authorities imposed a 24-hour curfew, drawing international condemnation.

The Lagos government asked the army to deploy due to “violence which led to several police stations being burnt, policemen killed, suspects in police custody released and weapons carted away,” the military said in a statement published late on Tuesday said.

“The Nigerian army in the discharge of its constitutional responsibilities did not shoot at any civilian as there are glaring and convincing evidence to attest to this fact,” the statement said, without providing details of the evidence.

The army, which has said it was not at the site of the shooting at the Lekki Toll Gate, and the Lagos state governor’s office did not respond to calls and messages seeking comment. The military statement did not say how they intervened to curb unrest beyond denying that its men shot civilians.

Amnesty International on Wednesday published an investigation in which the rights group said it had tracked Nigerian army vehicles from their Lagos barracks at Bonny Camp to Lekki Toll Gate using photographs and videos of the soldiers’ movements culled from social media.

“What happened at Lekki Toll Gate has all the traits of the Nigerian authorities’ pattern of a cover-up,” said Osai Ojigho, Amnesty’s Nigeria head.

A Lagos-based soldier, who declined to be identified because they were not authorised to speak to media, told Reuters troops of the army 81st Division’s 65th Battalion, based at Bonny Camp, had fired on unarmed civilians at the toll gate.

The army also did not respond to requests for comment on Amnesty’s report or the soldier’s account.

Police and soldiers killed at least 12 people in two Lagos neighbourhoods on Oct. 20, according to witnesses and rights group Amnesty International. Police have also denied involvement.

Witnesses at Lekki described armed men in army fatigues arriving at the site of the peaceful protests around 7 p.m., where demonstrators knelt to wave flags and sing the national anthem, before the men raised their guns and shot into the crowd.