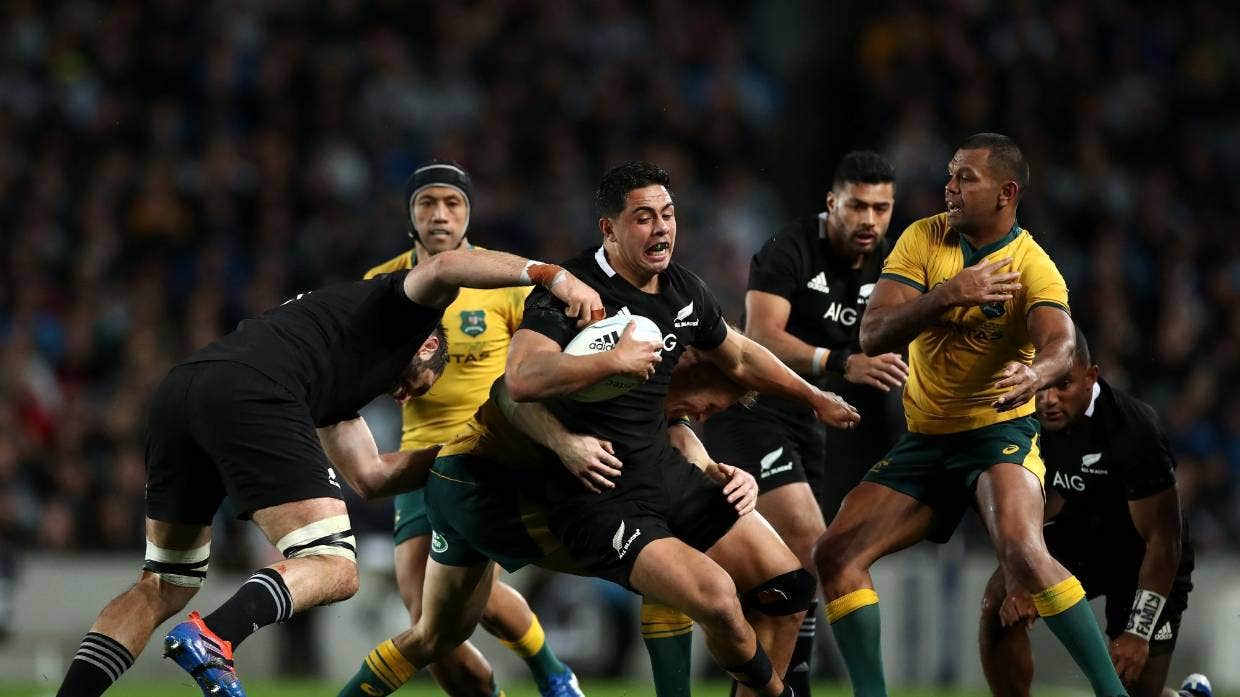 The All Blacks have been confirmed to play two Bledisloe Cup tests in New Zealand before heading to Australia for the Rugby Championship. AMERON SPENCER/GETTY IMAGES

Dates and venues for the All Blacks two Bledisloe Cup test matches against the Wallabies have been confirmed and neither will clash with New Zealand’s election.

The first will be played in Wellington on Sunday October 11 with the second test at Eden Park in Auckland, seven days later.

With the New Zealand election on Saturday October 17, the Eden Park test will not clash with election night, as was predicted. In a massive win for fans who have been crying out for more afternoon rugby, both tests will kick off at 3.30pm.

New Zealand Rugby (NZR) chief executive Mark Robinson has described the move to Sunday games as a two-prong benefit on each weekend but did confirm the election was a major factor.

“On the first weekend obviously it gives the maximum amount of time for the Aussie’s to prepare so taking it away from the Saturday and into the Sunday … it’s just another day for them to prepare and adjust,” he told Newstalk ZB.

“For the following weekend obviously there is a pretty significant day on the 17th that we wanted to respect.”

However, avoiding the clash with the election must have been a major consideration for NZR’s broadcaster to maximise TV ratings.

New Zealand Prime Minister Jacinda Ardern said on Monday, she had no issue with the election clashing with an All Blacks test.

Robinson also told Newstalk ZB the success of Sunday afternoon matches in Super Rugby Aotearoa had given NZR confidence in that time slot.

It is not yet known when tickets for the two Bledisloe tests will go on sale with the details and crowd numbers dependent on updates on the Government’s Covid-19 Alert Levels.

Detail for contingency plans should New Zealand and especially Auckland’s Covid-19 clusters flare-up are currently vague but Robinson said NZR would be giving that space more attention now the two test dates and venues are locked in.

“At the moment we’ve got really positive indications that things will be tracking well by early to mid-October, but we’ll continue working closely with quarantine and health ministries and everyone associated with any decision making,” Robinson has told Newstalk ZB.

Robinson said he was grateful to the New Zealand Government for easing the isolation restrictions to allow the Wallabies to come into the country and prepare for the two tests and has confirmed those changes made a “significant difference” in getting the Wallabies to New Zealand for the October dates.

Under the new Government guidelines, the Australian squad will be able to train fully as a squad four days after arriving in the country, dependent on all squad members returning a negative Covid-19 test on day three.

“We’re delighted to lock in the dates and venues for the two home matches against Australia and look forward to seeing the Bledisloe Cup go on the line next month,” Robinson said.

Before the changes, Wallabies coach Dave Rennie slammed New Zealand’s “unacceptable” quarantine protocols over the weekend because they prohibited his team from training together on arrival in the country.

Rennie said his team would not be playing on October 10 and it turned out he was right but the relaxed protocols mean the Wallabies will be ready to go on the 11th, as confirmed by interim Rugby Australia chief executive Rob Clarke to the Sydney Morning Herald on Tuesday evening.

Robinson said confirmation of the Bledisloe Cup dates meant there would be a change to the Mitre 10 Cup schedule for both Bledisloe Cup weekends, and NZR would be working with provincial unions regarding these changes.

“We acknowledge that this has been a complex and challenging puzzle to solve and we’re grateful that both rugby organisations, together with our Government, have come together to get these matches across the line,” Robinson said.

“We’re also pleased that the All Blacks team and management now have certainty and can plan accordingly, and we wish them all the very best for the Bledisloe Cup campaign.”

All Blacks coach Ian Foster named his squad for the two Bledisloe Cup test matches earlier this month with seven new caps in his 35 man squad.

The Bledisloe Cup tests will be the only two times the All Blacks play in New Zealand in 2020 following Australia winning the rights to host Sanzaar’s Rugby Championship.

Dates and venues are yet to be confirmed for the Rugby Championship but the bulk of the competition is expected to be played in Sydney.

The second Bledisloe test won’t clash with the election but it will clash with iconic Supercars race the Bathurst 1000 which this year doubles at the championship decider with Kiwi driver Scott McLaughlin currently leading the title race.

The All Blacks have held the Bledisloe Cup since 2003.

The Wallabies won the first test of 2019 47-26 in Perth before the All Blacks won the return match 36-0 in Auckland to retain the Bledisloe Cup.