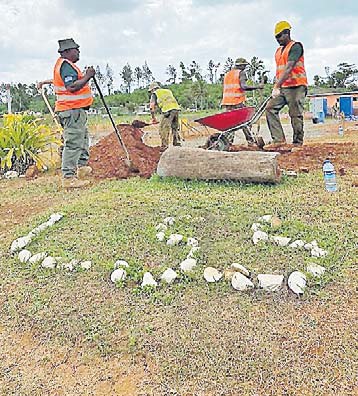 The Australian Defence Force (ADF) team conducting building works at the Lekutu Secondary School in Bua has hailed the Republic of Fiji Military Forces (RFMF) for its innovative skills.

“Each day, the site is alive with activities and the integration of the separate groups that make up the construction engineering team (CET) has been seamless and the collaboration of knowledge and experience has served as a catalyst to progress,” he said.

“For instance, the nifty Fijian method for hand bending the collective five kilometres of reinforcement bar using an inexpensive and simple jig was vastly more efficient than the conventional method we, the Australian contingent, had planned on using.

“In retrospect, had it not been for adopting that (Fijian) method, the four days spent bending the thousands of rebar components would easily have been doubled.”

Lieutenant Finnane said that was just one of many examples that were testament to the ingenuity of the RFMF where material shortage had driven resourcefulness and creativity. Contingent Commander and senior project engineer Major Donald Robertson said education infrastructure was a key priority for the Fijian Government and the local community.

“I am also deeply impressed with the resolve of the workforce in delivering the scope in arduous conditions,” he said.

“I’m equally pleased in how well the RFMF and ADF have integrated and in how they are working alongside each other and learning from each other.”

Lekutu Secondary School was among schools on Vanua Levu that were badly impacted or damaged by Tropical Cyclone Yasa in December last year.