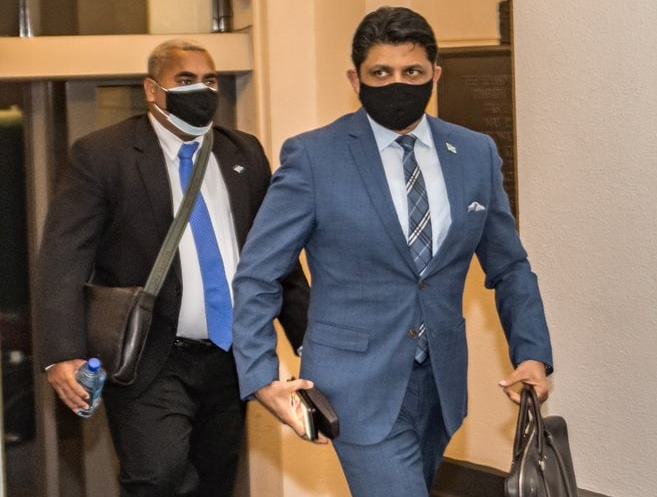 Attorney-General and Minister for Economy Aiyaz Sayed-Khaiyum makes his way into Parliament to deliver the 2021-2022 National Budget. Picture: PARLIAMENT OF FIJI/SUPPLIED

Government is not responsible for Fiji Mahogany Trust reports, Attorney-General and Minister for Economy Aiyaz Sayed-Khaiyum told Parliament yesterday when the Parliamentary Committee of Supply was deliberating programs in the 2021-2022 National Budget.

He said this while answering queries from SODELPA Leader Viliame Gavoka on why the trust was allocated $250,000 in the budget.

Mr Gavoka said Fiji’s mahogany industry was the biggest in the world but the impact was not seen on the economy.

“The prime minister needs to provide a report so we can see what is happening,” Mr Gavoka said.

“We need to see what is happening with the trust.”

Prime Minister Voreqe Bainimarama said he could not understand what Mr Gavoka was harping about when the report had been updated.

Mr Gavoka said the $250,000 was taxpayers’ funds and people needed to know how the funds were used.

In response, Mr Sayed-Khaiyum said the $250,000 was allocated in the past years and now Mr Gavoka wanted to make an issue out of it.

He said the Fiji Mahogany Trust was an independent organisation and Government contributed $250,000 annually to it.

“Go ask them where the report is, honourable Gavoka doesn’t know what he is talking about.”